Our modules are pre-programmed for YOUR truck. Plug and play! 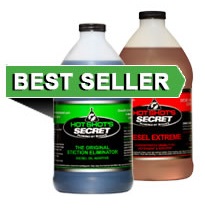 Before you spend thousands to replace your injectors, treat your entire system with this duo!! Stiction Eliminator cleans the oil side while the Diesel Extreme Clean and Boost cleans the fuel side.

Hot Shot's Diesel Extreme Fuel System Clean and Boost fuel additive:  Restore your diesel to its original performance power. Extreme cleaning and boost to rejuvenate your engine. Clean everything in your tank, lines and injector tips and remove moisture.

Hot Shot’s Secret Diesel Extreme is designed to support a “clean then boost” strategy. Diesel Extreme is unsurpassed in its cleaning power and will cleanse your whole system including cylinders and lines. It will restore your fuel system components to their original cleanliness and prepare them for maximum response when Diesel Extreme’s cetane booster kicks in.